PHOENIX – This week is forecast to be a scorcher in the Valley, and city officials are asking for more water donations to help those in need through the rest of the summer and into the fall. The goal is at least 300,000 bottles of water.

Temperatures are expected to climb as high as 115 degrees, and an extreme-heat warning is in effect for Maricopa County from Monday through Wednesday, July 23-25, according to the National Weather Service. There have been several such warnings this year, with the first one coming in early May. 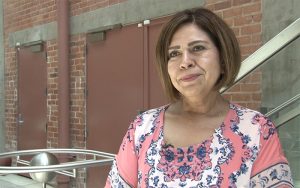 Briselda Rodriguez, community-initiative specialist for Phoenix, said the goal for donations was 300,000 bottles of water. (Photo by Allison Snell/Cronkite News)

The Centers for Disease Control report that extreme heat kills 600 Americans each year, more than any other weather phenomenon.

The city’s “We’re Cool” campaign is in need of water donations to benefit those most at risk in the heat: the poor, the homeless and the elderly.

“We partner with several nonprofits and houses of worship that work with our most vulnerable populations … such as elderly, homeless and youth,” said Briselda Rodriguez, community-initiative specialist for the city.

The program collects donations of money and bottled water year-round to help those in need during the hottest months. Those donations supply 44 hydration and cooling stations across the city.

Rodriguez says the goal is to get at least 150 pallets – about 300,000 bottles of water – distributed to these stations.

“Our program ends the end of October because our heat doesn’t end in the end of August, it lingers on,” she said.

Donations can be brought to any of the cities senior or family service centers.