PHOENIX — About one in five, 43.8 million, or 18.5 percent: these numbers all represent the number of people in the United States who experience mental illness in a given year, according to the National Alliance on Mental Illness.

Suicide is the third leading cause of death in young people ages 10 to 24, according to the Centers for Disease Control and Prevention.

Despite these numbers, there are no standards for mental health education in the Arizona schools. Each school district decides whether or how it will teach mental health in health classes. Several organizations and schools within the state and elsewhere the U.S. are trying to change the conversation for their students. 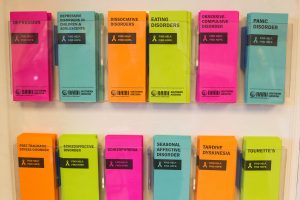 The southern Arizona chapter of the National Alliance on Mental Illness recently received a planning grant. The next step is a supplemental grant to build the program statewide.

According to NAMI Southern Arizona’s website, its main goal is to educate and “overcome the ignorance, misinformation, misconceptions and apathy that prevent true understanding and meaningful help from reaching persons with serious mental illness.”

“I think that our perception is that many, if not all, of the underlying difficulties that individuals who have mental illness struggle with ultimately stem from stigma surrounding those disorders,” H. Clarke Romans, executive director of NAMI Southern Arizona, said when asked why he and his chapter wanted to develop a statewide mental health education program.

The Tucson-based David and Lura Lovell Foundation, which supports mental health and education issues, in August, funded the development of a research-based, data-proven program for Arizona schools.

The national NAMI group has created a program, Ending the Silence, that has been used in several districts in the Tucson area. But the NAMI chapter needs money to expand the program across Arizona. It will learn in January whether they received the funds to turn its proposal into reality.

Ending the Silence is a classroom presentation for middle and high school students designed to raise awareness and reduce stigma surrounding mental illness.

“This education program was originally developed by a NAMI affiliate in a suburb of Chicago,” Romans said. “The way they implemented the program there, in those middle schools and high schools, was to give a classroom presentation that consisted of two people.”

One of those people is a young person who has experienced mental health struggles while in school. The other person gives out general information about what mental illness is, what the prevalence is and some resources. About six weeks after these presentations, the program does a follow-up survey to see what the students have retained and if they have put this new knowledge into action.

“The very encouraging feedback was that these follow-up surveys were showing that about 16 to 19 percent of the students were actually taking some action,” Romans said.

After hearing these results, Romans said NAMI took the program and distributed it out to affiliates across the country. NAMI has about 900 affiliates. 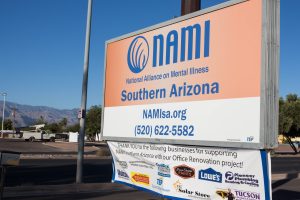 (Image: The Southern Arizona NAMI organization received a planning grant in August to devise a way to integrate Ending the Silence into all Arizona middle and high schools. (Photo by Tynin Fries/Cronkite News))

Romans and the Southern Arizona chapter have already been presenting the program to schools for years. That’s in part why his chapter was awarded the grant to revamp and prove the program can work across all Arizona schools.

He said NAMI Southern Arizona recently participated in a data-gathering research study by the University of Hartford in Connecticut to formalize the results of the Ending the Silence program.

As one of the affiliates participating, NAMI Southern Arizona went through all of the steps in the original program, but added a control group to help ground the research and take the “circumstantial phenomena” out of the equation.

“One of the reasons they needed this control group is, for example, if there is a shooting in Columbine, Colorado or Tucson, Arizona, at least for a small amount of time, the awareness and discussion of mental illness will go up,” Romans said. “Then after a month later it may go down to what I’ll call normal levels of awareness and discussion.”

Lisa Cole, 32, a young adult presenter with Ending the Silence, said the program is quite remarkable. Her role is to provide the personal perspective of someone who struggled with mental health growing up.

“I go as far back as 7 or 8 years old because I know for me personally, that’s when my symptoms really started to show themselves,” Cole said. “I talk about how I felt in high and middle school and how much I struggled. I continue from there to talk about my 20s when I was finally diagnosed correctly with bipolar disorder.”

Cole said her father accompanies her to these events because she also has cerebral palsy. She said for her dad, hearing Cole speak has a profound effect on him each time.

“He shared recently that he really wishes that something like Ending the Silence had been available to him when he was young,” she said.

She said being a speaker with NAMI Southern Arizona has helped her own recovery, as “recovery is not linear in anyway.” She said talking with young students is very important to her.

“The earlier a problem is addressed the more likely someone is to find the appropriate resources and get better,” Cole said. “I think that’s kind of at the forefront for me anyway. If they’re not exposed to it, then their symptoms are going to keep escalating and get worse.”

Mental health in the classroom

Gerald Todd, a content specialist for health and physical education in the Phoenix Union High School District, said having a health education requirement is important to his district.

“Each district has a certain amount of electives they can use to determine what they want to use as far as graduation,” Todd said. “Health is one of those classes that the Phoenix Union has determined that you must have to graduate.” 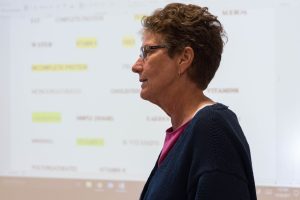 (Image Right: “I don’t have a textbook because a textbook is outdated like a few months after it’s printed,” said Kimberly Lurie, health teacher at Tucson High Magnet School of teaching health education. (Photo by Tynin Fries/Cronkite News))

Health education in the district is a half-credit requirement taken for one semester. Todd said in health classes, they talk about several facets of mental health and even include an assessment for students to learn about their individual personalities and possible predispositions.

“That let’s our kids kind of have an idea of what possible things may affect them or that they may fall in line with,” Todd said. “We say this is not a professional assessment — because we don’t have the right to diagnose — but that this is an assessment that kind of gives you an idea of something you may possess.”

Health classes are introduced to students at the ninth grade level and Todd said organizations come into classrooms to have conversations with students, similar to Ending the Silence. One of those programs is called Bloom 365.

“They came into several of the schools last year,” he said. “They do their program for seven days and they talk about everything from mental to physical health. And from reports I have seen, it seems to be received really, really well.”

Jo Ann Hoffert, who speaks in classrooms as part of the Ending the Silence program, said sometimes students are squeamish.

“I think some people are really uncomfortable with it and they’ll get up and walk out of the room,” said Hoffert, whose adult daughter had a psychotic break. “I think that if we emphasize more to the younger children that it’s okay and there’s help, that maybe they’ll feel more comfortable with it and be able to help themselves.”

Students also can take handouts home to their families.

“We’ll say, ‘Please take them home because you probably know more about mental illness now than your parents do,’” she said. “There was never any education about it.”

In the 2016 Arizona Child Fatality Review from the Arizona Department of Health Services, 768 children in Arizona died the previous year and 47 were from suicide. Of those 47 deaths, 98 percent were determined to be preventable.

“Suicide is an epidemic. It’s the number two killer of all kids right now. That’s so scary,” said Jennifer Vogel Rogers, co-founder of Speak Up, Stand Up, Save a Life. “That means people aren’t talking about it.”

Similarly to Romans, Rogers and her other two co-founders, Gina Godbehere and Lily Matos DeBlieux, saw a need to create a conversation in Arizona about students’ mental health.

“The kids talk about what their biggest issues are and it’s basically conflict solution,” Rogers said. “So what are the issues that are surrounding your school or you personally? And then what are you going to do to speak up about it? How can we communicate with you?”

The conference began when the three co-founders attended a Leadership West event where West Valley police and fire chiefs gathered on a panel to talk about serious issues including school violence, suicide and Black Lives Matter. 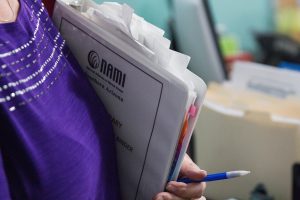 The panel discussion came six days after a student murder-suicide at a Glendale high school.

Rogers, a police chief, prosecutor and others said the warning signs had been on social media but no one talked to someone who could have stopped it.

“‘There’s always people talking and communicating. Our problem is, how do we get them to talk to us?’” Rogers recalled of that moment.

That led to the first Speak Up conference in January. She said they are expecting 5,000 participants at the January 2018 conference.

“People say, ‘Oh, is your conference about drug abuse or suicide prevention?’ It’s really about communication. That’s why ‘speak up’ is the first thing,” Rogers said. “We have to be good listeners. Communication is not about talking at someone.”

She said they felt the student-led conversation was important as it allowed the students to connect with one another.

The future of Silence

Of the estimated 205,000 children ages 3 to 17 in Arizona who live with mental/behavioral health conditions, only about half of them receive treatment, according to the 2016 National Survey of Children’s Health.

According to Mental Health America, in a ranking of states and Washington D.C. to determine which offered the highest rates of access to mental health care by how prevalent mental health issues are in each state, Arizona ranked 50 out of 51.

The planning grant NAMI Southern Arizona received in August is designed to improve these Arizona numbers, but more importantly, the hope is it will make mental health discussions common and stigma free.

Romans said a part of the planning, called The Collaborative, is to include voices from the community who feel ending the stigma is worth the effort.

A key objective of the proposal is to find several schools across the state that are excited about it and are willing to integrate it. Their main concern isn’t that it be in every Arizona high school in three years. It’s just important that it does grow.

“If we can get 20 school districts to be what I’ll call ‘early adopters’ then I think we will have succeeded,” Romans said.

The planning grant will end in January, at which time the chapter will present its findings to the Lovell Foundation board for approval.

“I just want the kids to learn about this because I’ve been doing this for 40 years and many things have changed, but stigma still remains huge,” Romans said.